First Day of Summer in NYC - the Upper West Side

I normally post trip reports, but figured a recent afternoon and evening spent in the city is just as good. A few months ago I was able to score a pair of tickets to see my favorite musician in the world, Eddie Vedder at the Beacon Theater for June 21st (nice perk being in the fan club). I was so excited to see the show and the day had come. We had a car service that brought us to the theater where we picked up the tickets. Not the greatest seats, but with a tiny venue like that, no seat is bad. Before the show, we had made reservations to eat dinner at one my husband’s customer’s restaurant, called Ouest.

We headed down Broadway, about 9 minutes from the theater, where we came upon a red awning with the name “Ouest”. We found it! Immediately we were greeted by the owner/chef Tom Valenti. His warm smile invited us in for cocktail. He asked us about the show, since he himself is a huge fan. 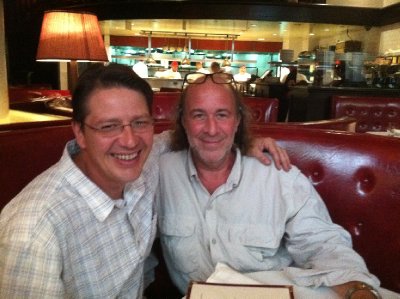 After a couple a few minutes, Tom took us to our table towards the back of the restaurant. The restaurant looks small from the outside, but as we walked further back, the room opened up to 2 levels with an open kitchen. We were seated in a very comfortable booth, where his top server gave us the wine list and menu. Since we were unsure of which red wine to order, we were given 3 different tastings to choose from. We wound up going with a wonderful cabernet. 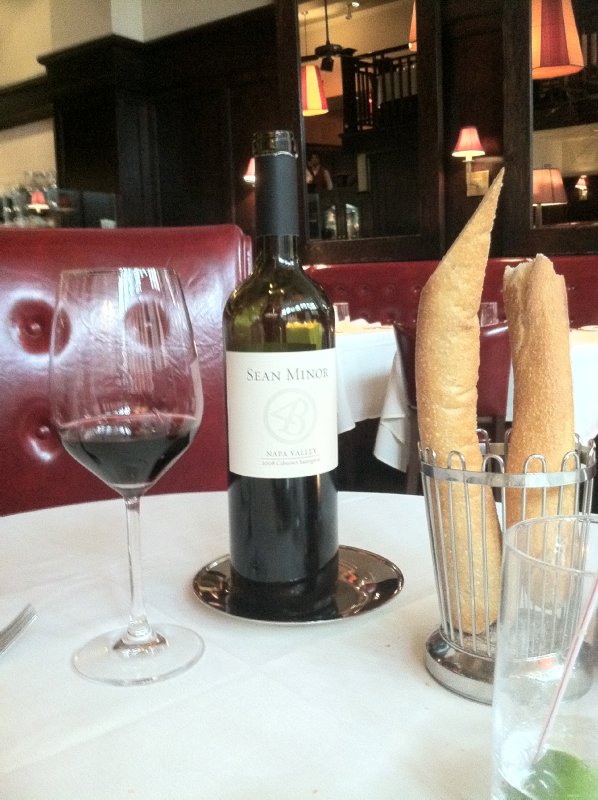 Tom then offered to give us a tasting tour off his menu since we could not decide what to order. Instead of the typical bread and butter to nibble on, there was a glass full of large crusty baquettes along side a ramekin filled with hummus and extra virgin olive oil for dipping, it was a nice added touch. The first course that came out was the salmon gravlax with chickpea pancake, caviar and mustard oil - the salmon just melted in your mouth. 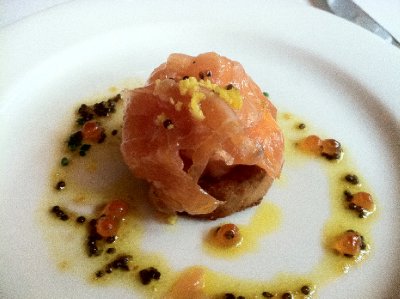 Our next course was a sampling of his soup of the day, a wonderful smooth and delicious sweet corn soup. 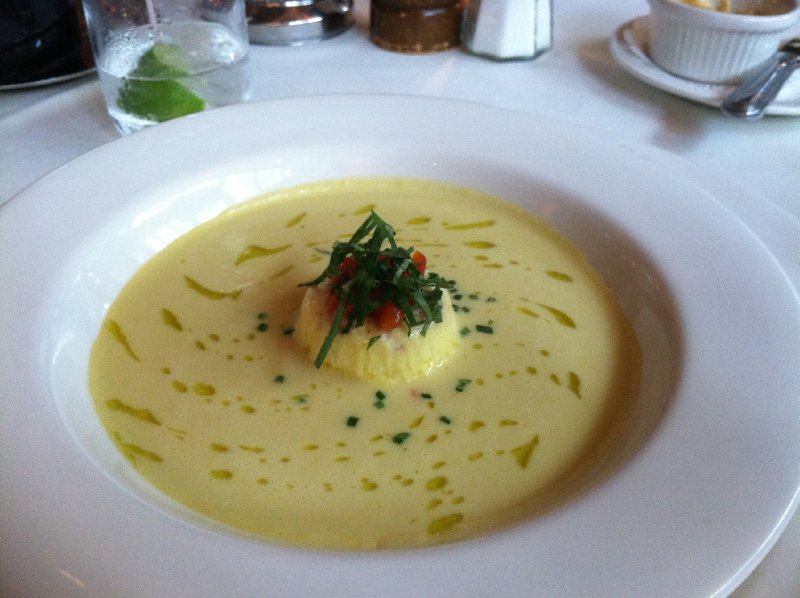 Two other plates were added to this course, I had the house smoked sturgeon with frisée salad, lardons and poached egg. My husband had the delectable tuffled omelet soufflé with mousseline sauce. 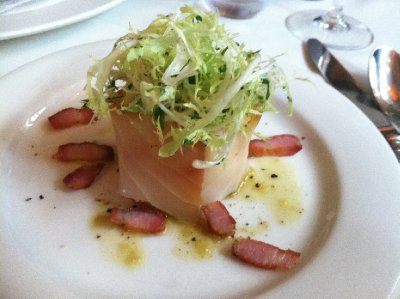 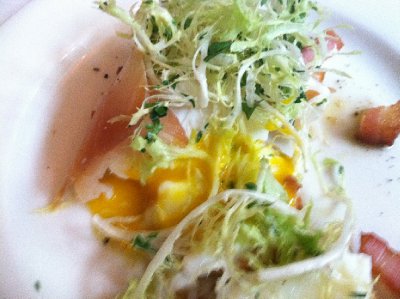 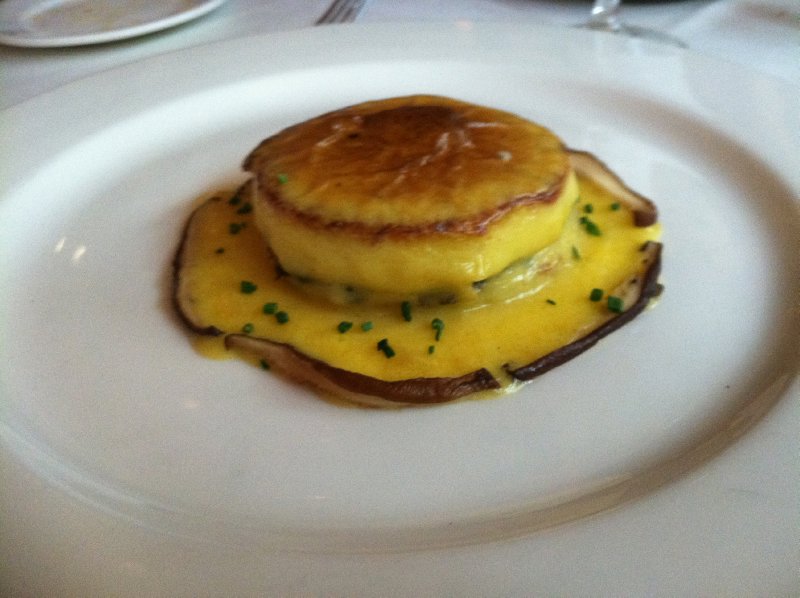 With our stomachs filling up a bit, we were brought the spinach and sausage stuffed quail with french green lentils and cabbage and the house smoked duck breast with crispy egg and bitter greens. I was warned by the server to be careful while cutting into the crispy egg, because it was known to spatter. I cut into the egg with success and did not get it all over myself or my husband. 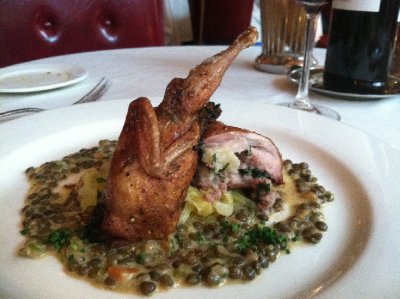 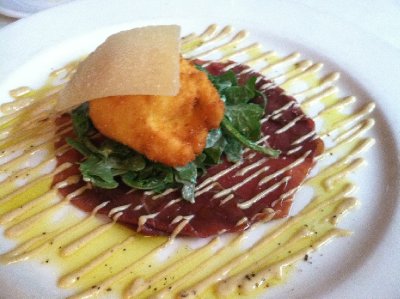 After taking a breathier, we were then surprised by another course. We were told that this was our entrees so we had a sigh of relief because honestly our stomachs really could not take in anymore food. The chef had the kitchen make my husband the braised beef short rib “pot au feu” with parmesan pastina and spring vegetables. 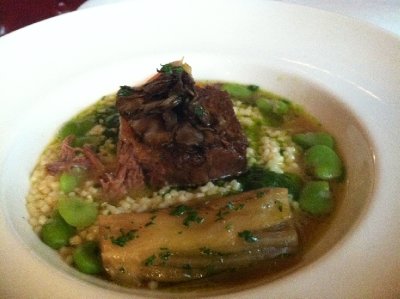 I was served Ouest’s Cioppino - which is very similar to bouillabaisse, consisting of tile fish, calamari, and other assorted shellfish in a tomato saffron broth. 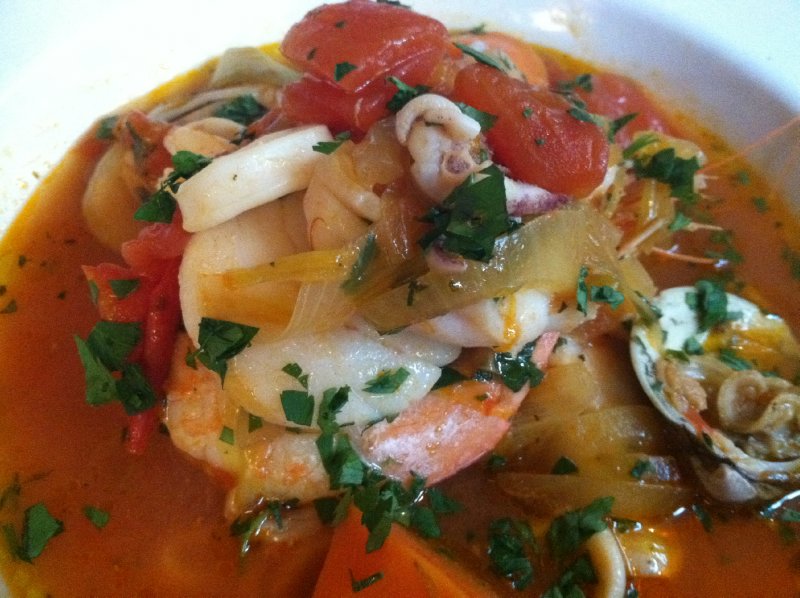 Tom came over and asked us how we enjoyed everything and told him how everything was just wonderful and we felt like judges on an episode of Iron Chef. He then said he had to go but thanked us for dining at his restaurant and to enjoy the show. We thought we were done, but low and behold dessert! We weren’t just given 2 desserts, but 3! The first dessert was the special of the evening, a wonderful créme fraiche panna cotta with fresh passion fruit and sesame tuile. 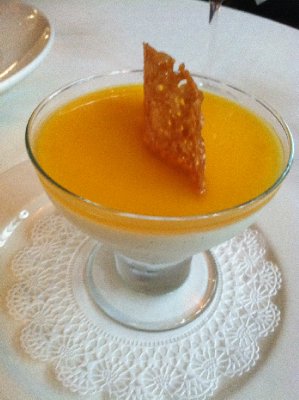 The second dessert was an iced cappuccino sundae with espresso semi-fredo and caramel sauce. 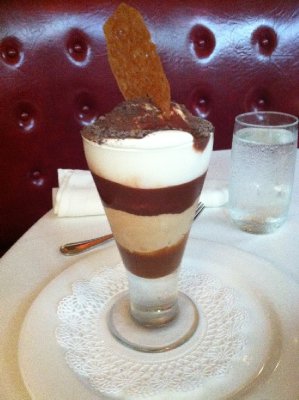 Our last plate was the upper Ouest style cheesecake with a topping of sour cherries. 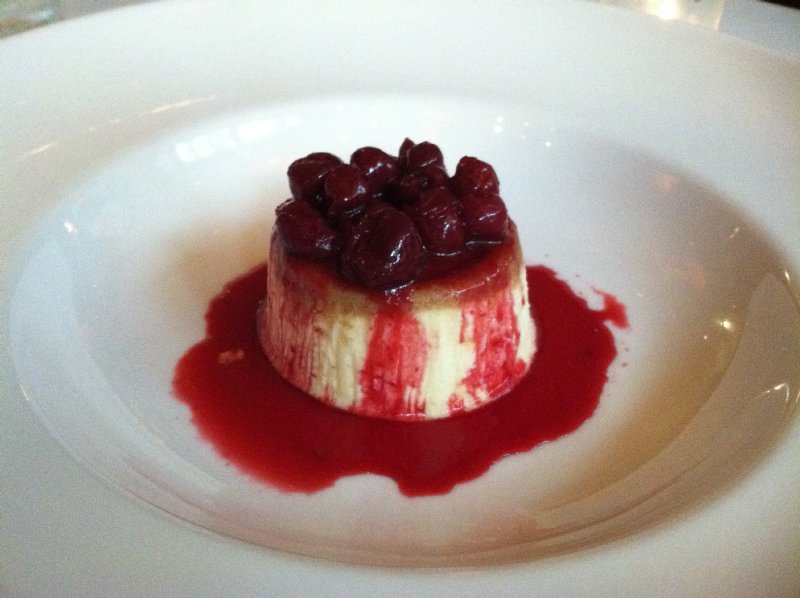 Unfortunately we were too full to finish all these desserts, but were able to sample each and every one. With our bellies full, we left Ouest and thanked the staff for a spectacular dining experience. We went to the show and were blown away by Eddie’s performance that night. It was a perfect way to end such an unforgettable evening spent on the first day of summer.

For more info regarding the restaurant, be sure to check out: http://ouestny.com

Previous Next Table of contents

Comments on this blog entry are now closed to non-Travellerspoint members. You can still leave a comment if you are a member of Travellerspoint.

If you aren't a member of Travellerspoint yet, you can join for free.